Current Mac OS X malware often persists and automatically starts by using the built-in launch system 1. This tool makes use of Automatic Folder Actions 2 in order to create a very basic but effective way of monitoring the addition of new launch objects to standard locations. In case a new object is placed in one of the monitored directories, a pop-up informs the user about the change, who then has in turn to decide if the change was legitimate or not. The new version is also monitoring locations where plug-ins are installed, for instance for common Internet browsers. The list of locations is displayed below. Besides displaying added files, this tool can also set up a log file where changes are recorded.

The tools enables Automatic Folder Actions on the system and monitors the following locations (depending if the respective software is installed):

If there is a file/folder added to any of theses locations, a notification script (which is included and copied to the User’s ‘Folder Actions Scripts’ folder) is executed which points to the change. 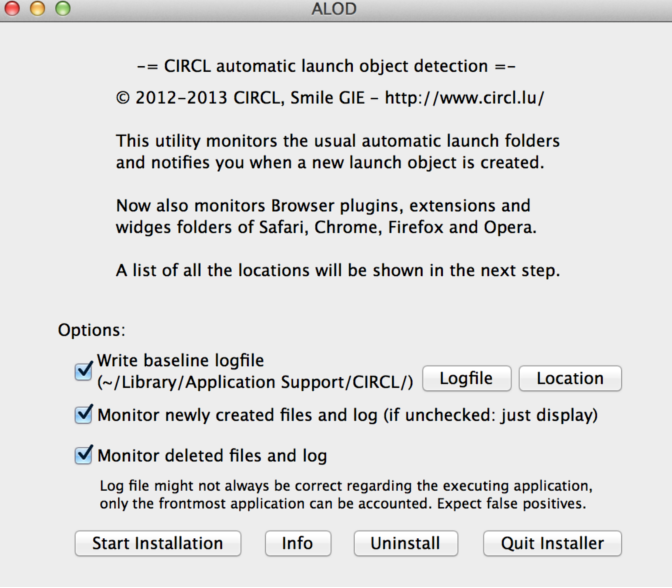 Unzip this file and execute Install.app and follow the on-screen messages.

The current version of the .zip file has the following checksums:

The previous version of the .zip file has the following checksums:

The versions before had the following checksums:

The source code of ALOD is available at GitHub.

Turn off Folder Actions and/or remove the monitoring for certain definitions in the same dialog. To get there, right-click any folder on your system and select Services - Folder Actions Setup

This work is based on an idea 4 by CNET’s Topher Kessler and contains many contributions from Chris Tomaziu (ctomnia at optusnet.com.au). Chris contributed code and was thoroughly testing buggy versions. Thanks Chris! Also thanks to the beta testers and their feedback, especially Marty Skinner.

Copyright (c) 2012-2020, CIRCL, Smile GIE - http://www.circl.lu  All rights reserved. Redistribution and use in source and binary forms, with or without modification, are permitted provided that the following conditions are met:

THIS SOFTWARE IS PROVIDED BY THE COPYRIGHT HOLDERS AND CONTRIBUTORS “AS IS” AND ANY EXPRESS OR IMPLIED WARRANTIES, INCLUDING, BUT NOT LIMITED TO, THE IMPLIED WARRANTIES OF MERCHANTABILITY AND FITNESS FOR A PARTICULAR PURPOSE ARE DISCLAIMED. IN NO EVENT SHALL THE COPYRIGHT HOLDER OR CONTRIBUTORS BE LIABLE FOR ANY DIRECT, INDIRECT, INCIDENTAL, SPECIAL, EXEMPLARY, OR CONSEQUENTIAL DAMAGES (INCLUDING, BUT NOT LIMITED TO, PROCUREMENT OF SUBSTITUTE GOODS OR SERVICES; LOSS OF USE, DATA, OR PROFITS; OR BUSINESS INTERRUPTION) HOWEVER CAUSED AND ON ANY THEORY OF LIABILITY, WHETHER IN CONTRACT, STRICT LIABILITY, OR TORT (INCLUDING NEGLIGENCE OR OTHERWISE) ARISING IN ANY WAY OUT OF THE USE OF THIS SOFTWARE, EVEN IF ADVISED OF THE POSSIBILITY OF SUCH DAMAGE.